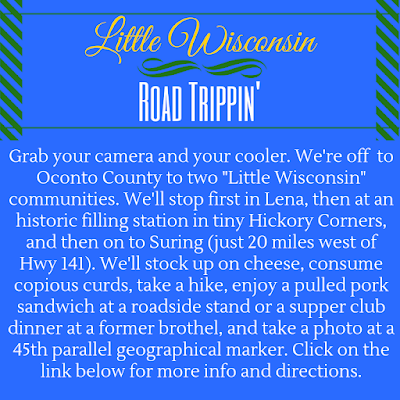 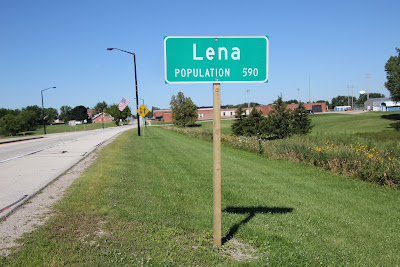 First stop is Lena, to visit Kugel's Cheese Mart.
Lena was first known as "Maple Valley", but when the
railroad came through the name had to be changed
because there was already another stop with that name. 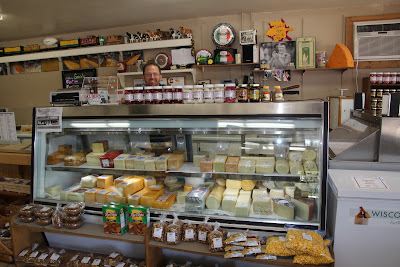 Kugel's Cheese Mart has been in business since 1952.
It was started by Bernice and George Kugel.
The store was purchased by their son in 1973.
In 2008 his son, James (Bernice and George's grandson),
purchased the store. So Kugel's Cheese Mart has been in
the Kugel family for three generations.
James' brother, Bill, is the friendly face behind the counter.
You'll find Bill there most days, and especially
on the weekends, when, during summer months,
they sell as much as 150 pounds of cheese curds per day!
In addition to the varied and delicious cheese and curds choices,
there's beef sticks, jams and jellies,
crackers, popcorn, mustards, and seasonal gifts --
everything you'd expect at a Wisconsin cheese mart.
BTW, that's Bernice's photo on the shelf on the wall. 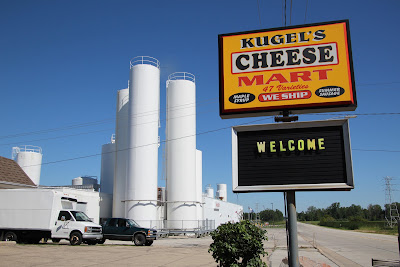 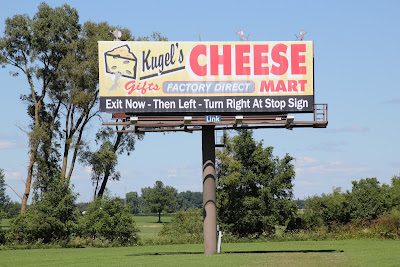 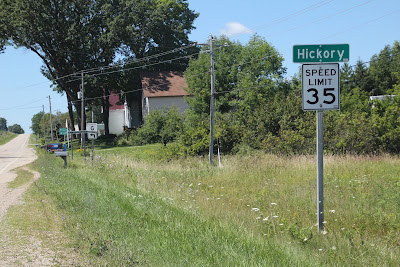 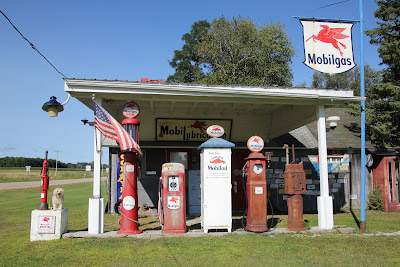 The Hickory Corners Filling Station is a "canopy"-style gas station built in the 1920s by Fred Longard. The office housed a small store stocked with groceries, hardware and other supplies. When Longard moved to a larger station across the street, this station was closed. It was used as a summer cottage after that. The building was bought in 1980 by Robert Broetzman, who began decorating it with gas station memorabilia. It's a magnificent labor of love! 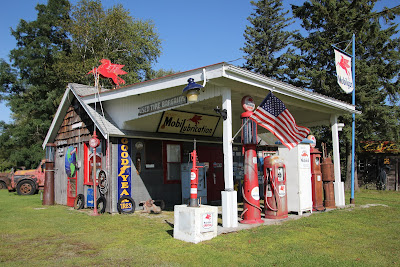 The station's set up so you can drive your car up and take photos. 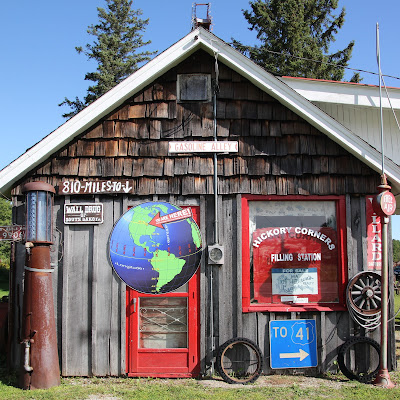 The Hickory Corners Filling Station is located along the 45th Parallel! 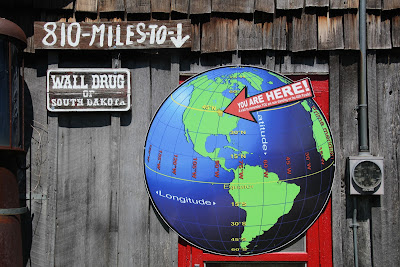 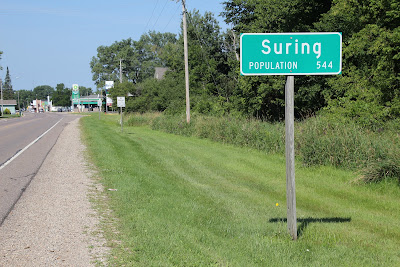 Head due west from Hickory Corners and in 10 minutes
you'll arrive in Suring. All the locations below are located
along Main Street / County Highway M, and are very easy to find. 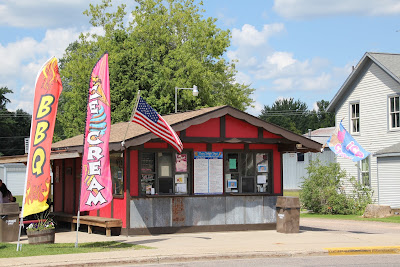 Get an ice cream treat, a burger or salad, or the best Carolina-style
pulled pork (smoked right on the premises) and slaw ever,
at Dairy Delite Depot. Check out their awesome menu: 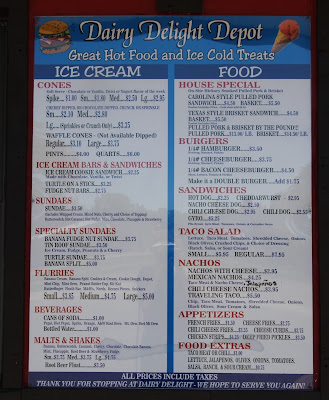 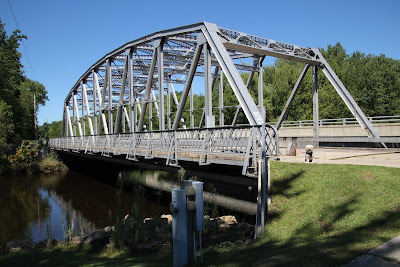 Head over to Riverside Park to walk the trails and view the wetlands.
There's a children's play area, a picnic area, a boat launch, a
river walk boardwalk, and the historic expansion bridge.
The bridge was saved from destruction during a 1999
highway construction project that included a new traffic bridge
across the Oconto River. The bridge links the east side
of Riverside Park with the west side wetlands.
The Oconto River offers opportunities for
sightseeing, canoeing, kayaking, fishing, and
all sorts of river-related activities.
It's a beautiful location!
Click here for more information on Riverside Park. 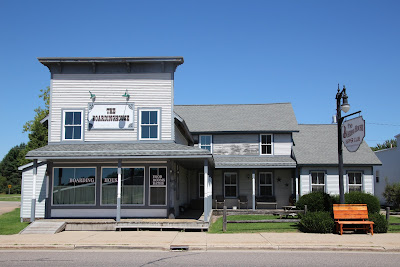 Back in the late 1800's logging days, this building housed
one of Suring's two brothels. It was also a "legitimate" boarding house
and restaurant. Restored to its original condition (sans the brothel),
the building is now home to The Boarding House Supper Club. 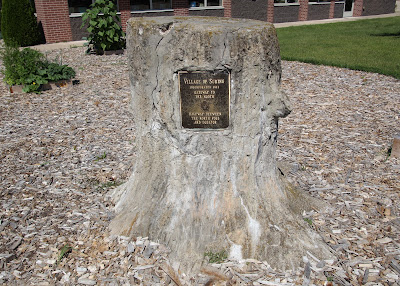 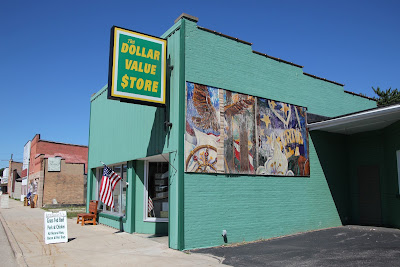 The Dollar Value Store stocks 100% grass fed beef, pork,
chicken, and lamb at very reasonable prices,
and regularly sells out quickly to customers
visiting from as far away as Milwaukee and Madison.
The meat comes from Sweet Grass Farm in Suring.

There is loads to see and do in Suring, including
a hike or a ride (all-terrain, horseback) on the Nicolet Recreational Trail,
a round of golf at the Red Maple Country Club, or participating
in the annual 5K/10K Walk & Run to "conquer THE HILL".
Main Street is peppered with unique shops and a variety of restaurants,
taverns and pubs. The Suring Area Historical Society is just about
ready to open a new museum. The people are welcoming and friendly.

For more information on these activities and more,
click here to visit the Village of Suring website.

Map of Oconto County Trip,
from U.S. 141 to Lena to Hickory Corners to Suring.